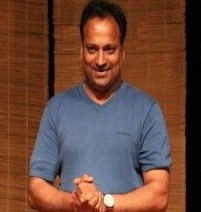 About The Director Ravi Mohan

Ravi Mohan, a renowned actor, director and trainer is associated with theatre and media for the last two decades. His theatrical journey of creative work has seen him in the lead role in more than fifteen plays. He has both trained as well as provided training in workshop. He is the artistic director of ‘Ras Kala Manch’, a group of established in 2002 to involve artists of various field in creative encounters. He has directed more than 35 plays and conferred with best director award in 2006, at Pune for “Naagmandala” and also received best director award in 2011 at Amritsar for “Ghasi Ram Kotwal”. He is contributed as actor and director in the national theater festival. He also acted in a T.V. serial named ‘Crime Petrol’ on Sony T.V. and ‘Aur Ek Kahani’ (Bahroop) on DD National Channel. He also acted in serial ‘Mahara Haryana Mahari Baat’ and ‘Sabrang’ which were telecasted on DD Hissar channel. He always gives credit to Smt. Dolly Ahluwalia and Sh. Kamal Tiwari Ji under whose guidance he had taken training of theatre.